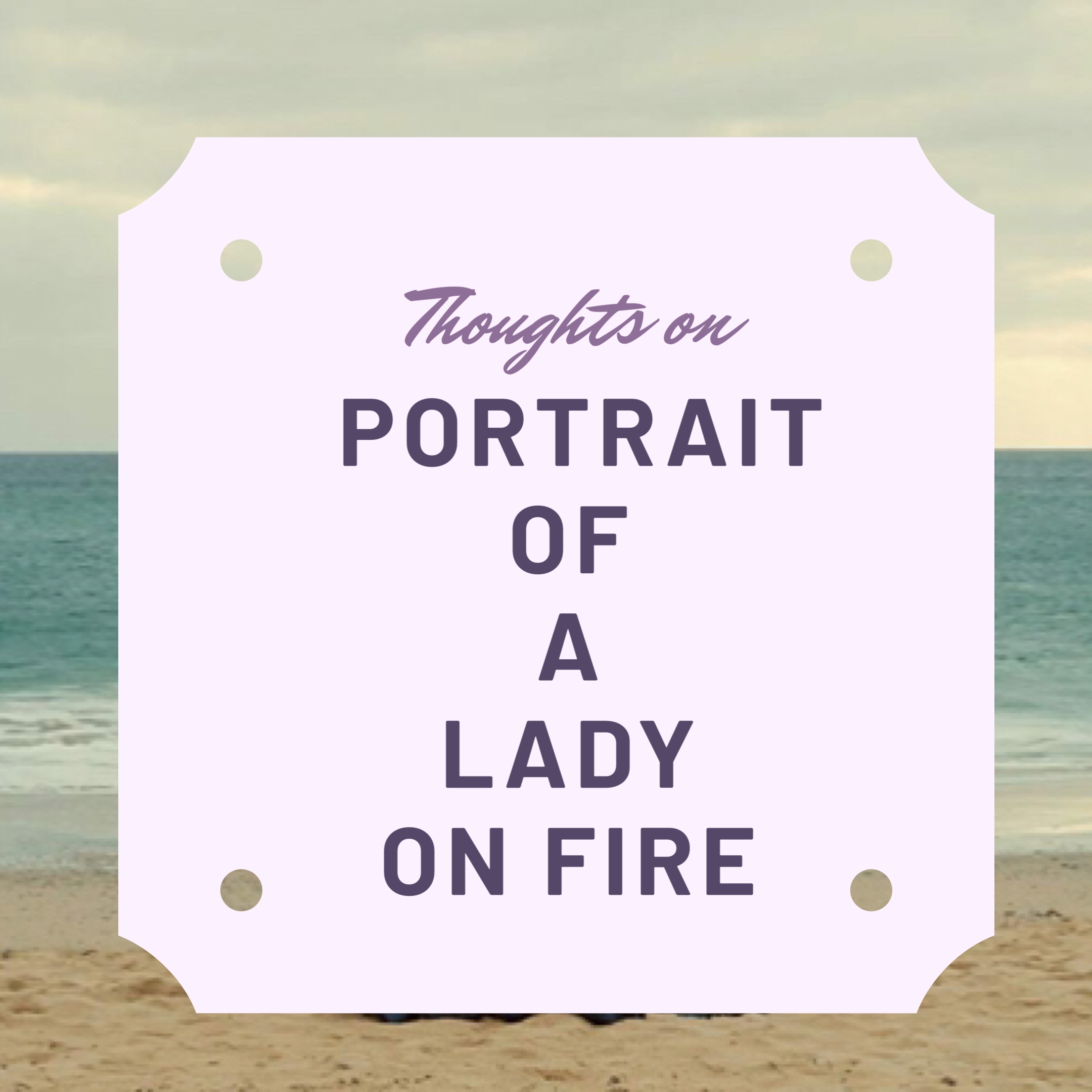 I am a huge art buff … And I would probably consider myself an artist as well. Not on a professional level but still. I love creating (Also: Check out my art/penpalling Instagram: @mupfinsmiley_art) and I think it’s one of the most amazing yet most human things to occupy yourself with …
The french film Portrait of a Lady on Fire uses this most human of all things to tell an equally human story.

Portrait of a Lady on Fire

Young artist Marianne is summoned by a rich Comtesse to paint a wedding portrait of her daughter. She is to spend the days with the young lady – Hélouise – pretending to be her gouverness while secretly painting her.
Her subject is about to be wed to a young man, yet the plans have been made against her will. She does not consent to the painting of her being made and shipped to her further groom, since she nows it delays the impending and dredded event. Therfore the secrecy.
The two women however grow ever closer which makes the coming goodbye ever so bitter.

The Importance of Art

As I’ve already alluded to in my introduction: Art is amazing.
It can be cathartic, traumatic, beautiful, ugly, purposeful, without goal … Yet it always stays one thing: Human.

There is something inherently human about creating. We can’t do wothout it. Whether our creation follows a strict goal – like early tools – our just exists to be pretty. It is something humans cannot do without.

Sure: There are theories – anthropological, evolutionary (look into that, it is really interesting) – art draws us in and so does the artist. So maybe art is just another way to woo a partner? To show affection? To show love?

It doesn’t matter in the end: Art is so important, yet so pointless.
Ever importance why try to attribute to it is pure creation and construction itself. And therefore arbitrary and just another illusion.

Pictures are nothing but illusions

Talking about illusions: Since creation has always also been associated with the divine and a right reserved to gods there has always been some stigma towards creations by humans. And as a human-made creation, pictures fall straight into that category.
There has always been some suspicion towards pictures: They’re mere illusions. They seem to show reality, yet what thery’re showing isn’t real. And it newer will be.
Of course there’s pictures well aware of their own dilemma and there’s stories dealing with that exact problem…
Yet none of that solves it.

And it is the exact problem Héloise’s husband will face once he recieves her portrait. All he has of her is an illusion.
Yes, sooner, or later he will hold the real thing – reducing her down to exactely that – but his initial contact with her will always be fake. Something that my define their relationship.
A picture can never hold up to the original. There will always be things off about it, even if ever so slightly. Yet that leaves room for … interpretation. Fantasy. He can conjur an image which she will never be able to reach. A relationship built upon an illusion will itself become nothing more.

Marianne is stuck in the exact opposite position: She has known the real thing, seen past the illusion she herself cast, yet she is still left with nothing.
The picture she keeps is nothing but look back. It’s of a situation past, a situation that will never come back. A situation she will forever bee caught up in.

Héloise is the only one who will know what lies beneath, yet she will always be in danger of getting tangled up in either one of those illusions.
It is unclear, whether she has moved on completely and accepted her role or whether she is as caught up in her past as Marianne is.

For a while the young women are being left alone on the island. The Comtess has to attend some important business elswhere.
This is when their relationship truly develops.
A lot of things happen to the two women and the maid – Sophie – during that time.
Left to their own devices, left with a group of strangers, they start to grow close.
An openess is created between the characters that probably would have never happened, if they weren’t left alone for some time.
Instead of succumbing to loneliness and solitude, the form a bond.

The three women even join in on some festivities with the locals.
So far we haven’t seen that. For the most part, I didn’t even know there were other people living on the isle.
All three have been caught up with themselves, chained to solitude … yet they manage to overcome that. Together

Fate, however is inescapable. And as the countess returns, so do the problems.
The portrait has to be finished and the women have to go their separate ways eventually.
Hélouise has to get married and Marianne returns to her shop.

On their last day together Hélouise wants Marianne to draw themselves for each other and she obliges.
The drawing she produces however is made with pastels and chalks. Materials that aren’t very much made for eternity, unlike oils or acrylics.
Anyone who has ever used pastels will know, that they only loosely add pigment to a surface and are easily smudged.
The husband, the person, who supposedly has no strong connection with Hélouise gets the eternal portrait, whereas her true lover … gets a fading memory.
The more often she’ll look at the drawing, thouch it, tries to be close to her love … The more faded it will become … The less she’ll have of her until nothing remains.

Is this, why Marianne decided to produce another picture? Of amoment, she wants to have in her mind forever? Even if. The face is barely visible and it seems as if she has already forgotten … smudged it.

In the end all that stays is the idea, the memory, the thought … Until you can’t even be sure about your own mind anymore.

The movie leaves us on a very unclear, yet melancolic note.
Marianne spies her beloved at the opera, yet she can only see her from afar.
Does she see her, too? Do both women share their thoughts? It is unclear.
Or is their memory smudged already?

Loudness in the Quiet

Portrait of a lady on fire is a very calm movie, a very quite film. Much in tradition with French films there are very few non-diegetic sounds. There is some music sometimes, but it almost always turns out to either be part of a scene or sound very natural, like a storm howling or the ocean screaming.
And the movie holds back on dialogue as well. It leaves room for its characters to breathe, to develop … And it leaves the same space for its viewers as well.
Sometimes that might seem a little … long-winded, yet I never felt as if though the pacing was off.

There is a certain loudness hidden within the quiet. While the movie stays quiet, the thoughts start reacing, dancing, drumming, screaming. There’s room for thought and emotion and there’s the quiet that allows them to get loud and run wild.
Same thing goes for the characters as well: The loudness doesn’t stem from them talking, the loudness stems from them moving, expressing, feeling. Even though there is nothing said, in the literal sense – the images still say it all while still leaving you alone with your thoughts.

consider following me on Social Media:

Or maybe check out one of these posts:

Thoughts on The VVitch
Thoughts on Parasite
Thoughst on Verdant Skies